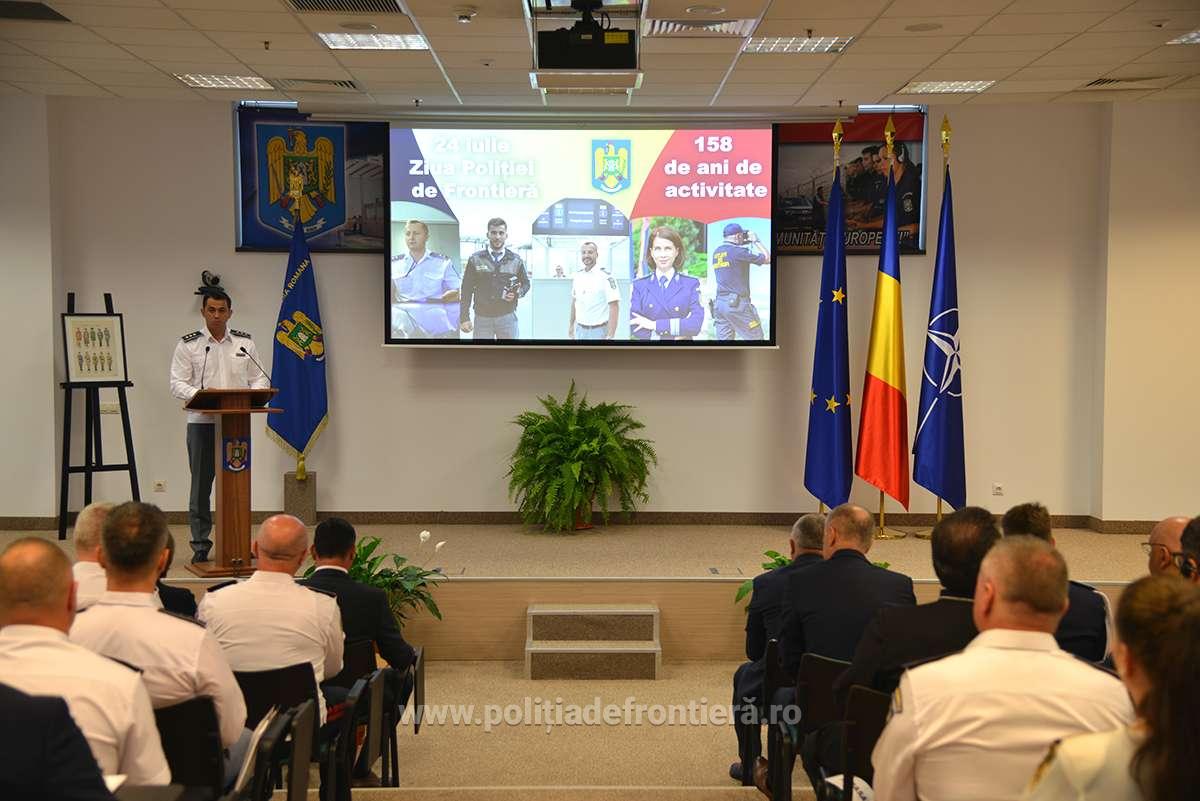 The Day of the Romanian Border Police (July 24) is an opportunity to reward the actions carried out by our colleagues, in the performance of specific missions at the border of Romania.

On this occasion, the inspector general of the Romanian Border Police congratulated the border police for the support and efforts they made from a professional point of view, during this special period, demonstrating the ability to mobilize and adapt, to be able to act effectively, on all plans and to contribute to the collective effort.

In the message addressed to the border police, at this special moment, the general inspector of the RBP specified:

It is the Day of all border policemen, who, through work, dedication, even making the ultimate sacrifice, handed over from one generation to another, with determination, the professional baton under the covenant of "self-surpassing".

….. We showed proof of adaptation in the 2 unprecedented situations in our lifetime - the Covid 19 pandemic and the existing armed conflict on the territory of a neighboring state, when the Romanian Border Police was the first institution of the state to act promptly in relation to their novelty.

The neighboring situation with a state - party to a war, was and still remains a complex one, being managed, from the day it started, with a lot of tact, self-control, empathy towards a neighbor in great suffering, but also with increased attention regarding border crossing by the large number of displaced persons…”

This festive moment represented an opportunity for the promotion of 200 border police officers, officers and agents working in the structures of the Border Police, specialists in land, maritime, airport border surveillance, who were singled out and rewarded with advancement to the next professional rank, before completing the minimum period, for special merits in the operational missions carried out, both on the territory of the country, following the participation in the joint operations organized by the Frontex Agency.

The majority of advanced border police officers come from the operative territorial structures of the border police, they stand out in the surveillance and control actions carried out at the state border, but especially in the missions to combat cross-border crime and illegal migration, having a important contribution to the operative results obtained by the structures of which they are a part.

At the same time, the general inspector of the Romanian Border Police awarded the distinction "Border Policeman of the Year 2022" to two border policemen, as follows:

Chief Police Inspector Ene Laurenţiu, from the Oradea Border Police Territorial Inspectorate, Nădlac Border Police Sector, for special merits and involvement in the management of the operative situation, the officer detecting over 20 means of transport in which there were groups of migrants.

Police principal agent Țolea Valentin-Andrei, from the GIURGIU Border Police Territorial Inspectorate - Calafat Border Police Sector, who, in February of this year, showing a special intuition, detected 82 kg of opium in a truck that presented itself at the entrance to the country. The drugs, estimated at over 6 million lei, were found in 8 packages hidden in the windshield of the truck.

The solemn moments of this event were completed by Mrs. Felicia Filip, the famous soprano who took Romania's name to prestigious stages all over the world and who did us the immense honor of being with us. Next to him was our colleague, chief police inspector Andrei Ene from the Coast Guard, and together they opened the anniversary event, singing the National Anthem of Romania.

Along with the Border Police, at this special moment, the incomparable artist Grigore Leşe was also present, who offered those present emotion, depth and joy through a piece of what he calls "the musical matrix of Romanians".

On July 24, 1864, ruler Alexandru Ioan Cuza signed the Decree by which the union of the border guards "from and beyond Milcov" was achieved, a moment that became a historical landmark for our institution, signifying the recognition of the institutional identity and, at the same time, the foundation stone of the Police of today's Border.

By the Emergency Ordinance of the Government of Romania no. 104/2001 regarding the organization and functioning of the Romanian Border Police, this historic date was designated as an official holiday of the Romanian Border Police, being the moment of recognition of the institutional identity and also the foundation of today's modern organization, which operates according to European standards.

In the 158 years of existence - and not only, because the defense of the country's borders has existed since ancient times - the Romanian Border Police has gone through several stages of transformation and improvement, depending on the character of the historical period experienced, but regardless of the form of organization or name, the mission has always remained the same, that of guardian of legality, order and tranquility at the border.