Starting with 27.01.2020, the Law no. 192/2019 for the modification and completion of some normative acts in the field of public order and safety, and the main amendments brought by GEO no. 104/2001 regarding the organization and functioning of the Romanian Border Police aim to introduce preventive or coercive measures to strengthen the border police authority, such as personnel with responsibilities in the field of public order and safety, who carry out missions in the area of competence (30 km from the border line inland) enters into force.

The normative act establishes the obligation that, during the course of these activities, the border guard is obliged to have a civilized behavior, to show kindness and solicitude, respectively to adopt a polite and firm attitude. The border guard must demonstrate self-control, communication ability and conflict management skills.

When and how does the legitimation and establishment of a person's identity take place?

The border guard is entitled to legitimize and establish the identity of the person only if (Article 272, paragraph 1 of GEO 104/2001 regarding the organization and functioning of the RBP with subsequent amendments and completions):

The legitimized person has the right to be informed, which is why the border guard is obliged to inform the person, verbally, the reason for the legitimation. (Article 272, paragraph 2, GEO 104/2001).

In case of refusal to legitimize or present identity data, the person is alerted that the failure to present the identity document at the request of the border guards constitutes a violation of the law and is sanctioned contraventionally, according to Article 75, letter d of GEO 105/2001 regarding the state border of Romania. If the person still refuses to cooperate in order to establish the identity, then he/she will be taken to the headquarters of the RBP structure to establish his/her identity.

As a novelty, by way of exception, when the measures provided above have not allowed the establishment of identity, for this purpose the border guard, even in the absence of the person's consent, is entitled to proceed to:

During the course of the legitimation action, the border guard is entitled to request the person who is the object of the legitimation to keep his hands in sight and, if necessary, to temporarily give up the means that can be used for an armed attack (Article 271, par. (1) GEO 104/2001).

In fulfilling his/her duties, the border guard is entitled to carry out the body search of the identified person and, as the case may be, of the luggage or the vehicle used by him only for (Article 273, OUG 104/2001):

of a person in a state of unconsciousness;

person tries to enter or is in places where their access is prohibited.

Body search is performed, with the respect of human dignity, by a person of the same sex with the controlled person and involves the bodily examination and the clothing of a person, visually, as well as by touching or pressing, the thick clothing can be examined separately. When objects are identified by examination, at the request of the border guard, the person is obliged to present them.

The baggage control involves an external examination of it, visually, as well as by touching and pressing. At the request of the border guard, the person has the obligation to open them and present the contents of the luggage.

The control of the vehicle[2] can also be carried out in order to identify a person pursued or searched according to the law, when there are probable reasons to suspect that it is present in the vehicle.

The vehicle is examined by viewing the compartments which, by construction, are intended for the transport of passengers and goods. At the request of the border guard, the person has the obligation to open and present the contents of the compartments.

The action of the border guard to dispossess the person of a firearm or a white weapon whose possession is visible or known does not constitute body search.

The border guard has the right to request the person subject to the body search to adopt a harmless position, which allows his effective and safe execution (Article 271, paragraphs 2-3, GEO 104/2001).

The request to adopt a harmless position must be appropriate to the danger that the person may represent and not exceed the real needs to reach the purpose of the intervention.

The border guard is entitled to take a person to the border police headquarters when (Article 274 paragraph (1), GEO 104/2001):

In the case of the minor or of the person without exercise capacity, the border guard has the obligation:

The border guard draws up a report[4] in which he records the reasons for the person's taking to the border police headquarters, the measures taken on this occasion, the way of exercising the rights, as a result of being informed, the result of the body search, of the luggage and of the vehicle control, the completion of the situation verification of the respective person and the measures undertaken.

[1] to carry out controls and to participate in the raids, independently or in collaboration with the local police bodies, when there are indications regarding the commission of crimes at the state border regime or the concealment of criminals or property from these crimes

[3] Establishing a person's identity is based on identity documents. When the person cannot present an identity document, the identity determination is made on the basis of an act provided with a photograph or of his statements, as well as of the border police checks, carried out on the spot, in the electronic databases to which he has access according to the law.

[4] The report shall be recorded in the records of the border police unit and signed by the border police officer and the person concerned or the legal representative. A copy of the report shall be delivered to the person concerned or to the legal representative, the refusal of signature or receipt being recorded in the document.

Seven citizens of Syria, Yemen and Egypt have illegally crossed the border over the Danube river, by boat 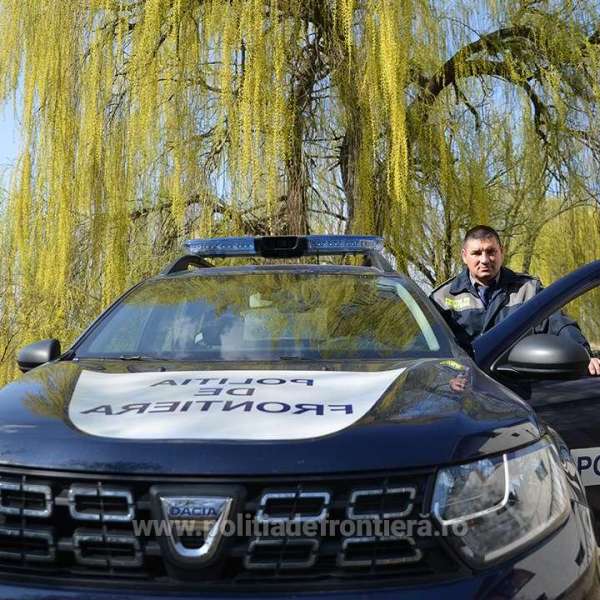 Amendments and additions to O.U.G. 104/2001 regarding the organization and functioning of the Romanian Border Police Approximately 30.000 items likely to be counterfeit, captured by border guards in January 230 vehicles brought to the attention of the authorities in the country and abroad, discovered at the border in 2019