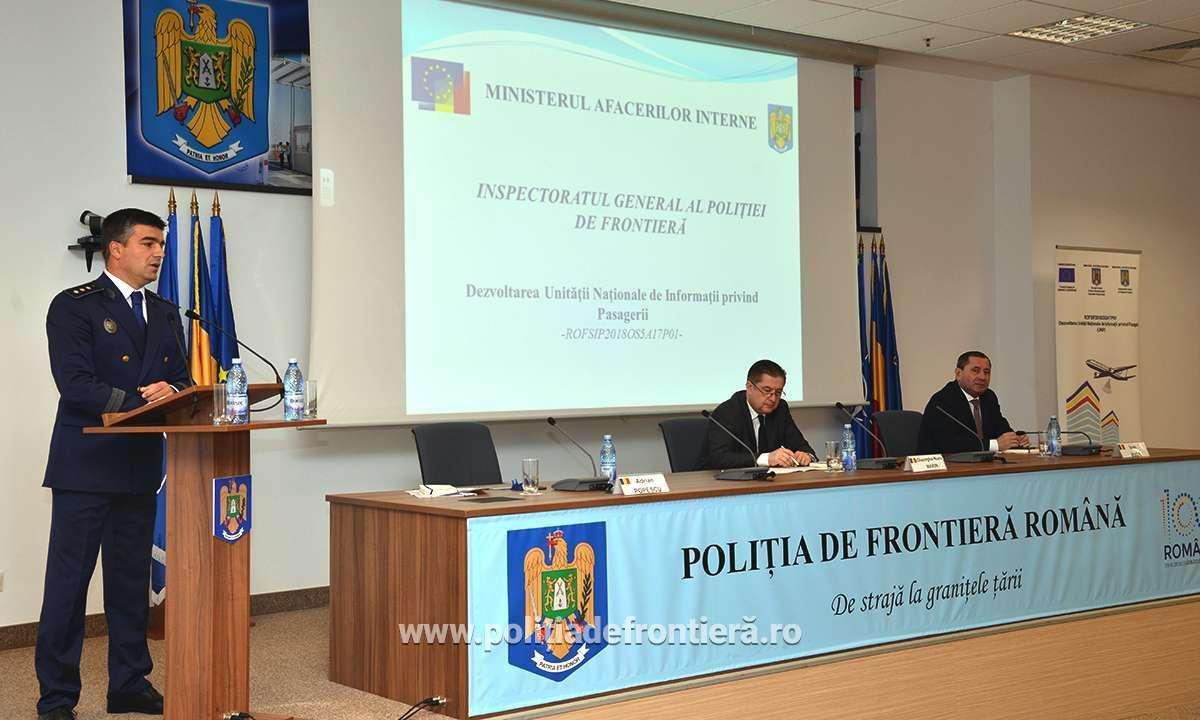 On 19 September 2018, at the HQ of the General Inspectorate of Border Police took place the opening conference of the project “Development of National Passenger Information Unit (UNIP)”, a project financed from the Internal Security Fund – component for police cooperation. Representatives of Passenger Information Units from the member states and Europol were invited, as well as representatives of national competent authorities, as direct beneficiaries of passenger name record (PNR).  Through this project, GIBP – NPIU proposes for the optimization of IT solution, creation of a data recovery center, training of the personnel, but also the ensuring of optimum work conditions for carrying out specific activities.

From the beginning of this year, the General Inspectorate of Border Police is the beneficiary of project “ROFSIP2018OS5A17P01– Development of National Passenger Information Unit (NPIU)” aiming at the enhancement of information exchange in order to prevent and counter terrorism, organized crime and serious crimes according to the EU Directive 681/2016 of the European Parliament and of the Council of 27 April 2016 on the use of passenger name record (PNR).

Through this project, GIBP-NPIU proposes to modernize the IT solution (extension of processing and analysis solution of PNR data, DMZ solution – demilitarized zone, back-up solution), together with the development of a solution of Data Disaster Recover, training of the personnel in the field of analyzing and processing of PNR data (implementation of targeting concept), but also the ensuring of optimum work conditions for carrying out specific activities, both for the personnel of the Romanian Border Police and for the national authorities representatives.

In this context, the efficiency of the system depends on the good cooperation between the air carriers, national competent authorities, European/international agencies, and the interoperability of the Passenger Information Unit.

The international context reaffirms the belief that the PNR represents an important instrument for the prevention of threats against security, using PNR data in the process of passenger identification with risk profiles.

Based on the Government Ordinance no 13 of 8 July 2015, starting with November  2015, within the General Inspectorate of Border Police, the National Passenger Information Unit (NPIU) was created as responsible structure with data passenger processing (PNR data) from the air carriers, in order to prevent and counter terrorism, terrorism related crimes and threats against national security.  In Europa, Romania was the third state, following Great Britain and France, which operationalized such kind of unit.

NPIU is the only national structure with competencies as regards the storage and processing of PNR data; the activities are carried out in cooperation with other competent authorities established by law, such as: Romanian Intelligence Service, Foreign Intelligence Service, General Inspectorate of Romanian Police, General Directorate for Internal Protection, General Directorate for Defense Intelligence, Prosecutor’s Office attached to the High Court of Cassation and Justice, etc.  The data processing and storage is realized in accordance with the rules in force on the protection of personal data.

NPIU is operational starting with 1 January 2016 and, until now, more than 100 air carriers were connected, being processed data for intra EU flights and extra EU flights.

The total budget of the project is approximately EUR 5.2 million, financed through the Internal Security Fund, of which the contribution of the European Union is EUR 3.9 million, and the national contribution is EUR 1.3 million and covers a period of four years.